Velvet shank, aka Enoki is one of the tastiest mushrooms. In addition, it grows even in winter 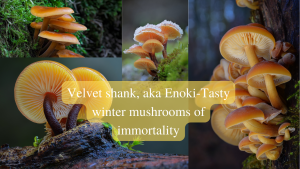 The velvet shank, aka enoki,  can be collected even during the winter months. In addition, it is a delicious and healthy kitchen ingredient.

Do you also love mushroom dishes? You will surely agree that there is nothing better than preparing a delicacy from fresh fruits. And it is real even now during the winter. We do not mean that you visit a supermarket and buy mushrooms there. You can also find them in nature. In addition to the notorious oyster mushroom and Judas’s ear, we can also find the velvet shank known as Enoki or Enokitake.

Extension of the velvet shank

The velvet shank (Flammulina velutipes) is an edible mushroom called Enoki in Japan, which is widespread in the northern hemisphere, in the temperate climate zone. However, it also occurs in Australia. It is trendy on the Asian continent, where it is even cultivated, as it is a popular kitchen ingredient that is used as widely as, for example, oyster mushrooms.

How to recognize a velvet shank, Enoki mushrooms

It is relatively easy to recognize by its honey to an orange-colored hat, which is shiny and sticky when wet and has thick, whitish scales and a thin, velvety hairy stem. In older fruit trees, it is even black-brown. In winter, you can’t mistake Enoki for any other mushroom. It is similar to the mildly poisonous sulphur tuft also known as a clustered wood lover (Hypholoma fasciculare), which grows in autumn,

but it does not have a dark leg and the leaves are yellow-green. However, the frost destroys this fungus, unlike the velvet shank.

Velvet shank in the kitchen

Although many have no idea, enoki is one of the tastiest mushrooms. However, only hats that can be 8 cm wide are used. They are used in noodle and vegetable dishes, they can be added to salads or risotto. They are also suitable for soups, and sauces and are also excellent with chicken. You can roast them and put them on bread or toast.

This mushroom is often grown commercially to meet the demand, as it is also an important medicine. Her popularity in healing has always been high, especially in Japan, China, and Egypt. Interest in it rose after a Japanese doctor studied the incidence of cancer in the general population and the population growing and consuming enoki in the last century. Already in ancient history, enoki was valued by the ancient Egyptians and Chinese. In Egypt, it was considered the mushroom of immortality and was reserved only for the pharaohs. In China, it is regarded as a life-prolonging mushroom. Enoki contains many active substances – vitamins, minerals, polysaccharides – beta-glucans, antioxidant polyphenols, and isoflavones.

What other mushrooms can we collect in winter? You will be surprised how many types of mushrooms grow in winter.

Lilac is not only fragrant but also medicinal. What are benefits?