Turmeric benefits – spices with healing effects as a houseplant

Today we will show you one of the very effective and beneficial substances, namely turmeric. Turmeric benefits are a great source of minerals, fiber and vitamins, and in addition to color and taste, you can add a wide range of nutrients by adding turmeric. 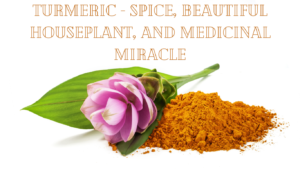 In winter, perhaps more than in summer, we need to see the beauty of flowers and plants, which will captivate with their unusual appearance and overall charm. The flowers excite the eye and delight the soul. Turmeric is one of those we see in florists all year round, even in winter. Turmeric or Indian saffron is mainly known to chefs, who add this yellow spice to their dishes. It is one of the important components of traditional Indian curry spices. Turmeric is not only a spice but also a beautiful houseplant. But do you know that you can grow it at home? Turmeric benefits

The ginger family will never disappoint

Turmeric, a perennial plant of the ginger family (Zingiberaceae), grows to a height of between 40 and 90 cm. Roots and leaves grow from their swollen articular rhizomes. Between the leaves, which are first rolled up and later opened, grows a straight, strong stem bearing a dense ear of flowers. Curcuma alismatifolia is most often grown for decoration. The plant comes from Thailand. With its charming flowers in white and pink-violet, it resembles tulip flowers. Hence its folk name is Thai tulip. This species is by far the easiest to grow. Turmeric benefits

Turmeric benefits. Do you like them? Grow your own turmeric at home

Turmeric is grown similarly to ginger, with Curcuma alismatifolia having the least demands on cultivation. Plant the tuber in a light sandy-loam soil, do not forget to put a drainage layer on the bottom of the container so that the tuber does not rot. Place the flowerpot with the plant in a bright place, for example on the south or east window. The more light you give the plant, the better it will thrive and bloom.

Sufficient air humidity is also a condition for good growth. During the summer (it thrives when it is hot and humid) you can place the turmeric in an outdoor, slightly shaded area or in a greenhouse. It needs to be watered and grown extensively, you can fertilize it once every fortnight.

As soon as temperatures drop below fifteen degrees Celsius, move the plant to a warmer place. At this time, the leaves begin to wither and slowly retract. Place the plant (tuber) ready for winter in a cool, frost-free room with a temperature of about seven degrees.

For wintering tubers in the soil, keep watering to a minimum, do not irrigate the tubers removed from it at all. They will survive the winter at this stage. They start to wake up at the turn of March and April – that’s when they landed again. Transplant tubers are placed in the soil over the winter into the new substrate. Raise their temperature and slowly start watering them.

The enchanting turmeric flowers are suitable not only for exotic bouquets. They can be in the vase completely independently, for example as sludge or anthurium. Their beauty thus stands out best. Another way to use flowers is a wedding bouquet. The bouquet for the bride in a pink-violet color may contain several flowers of the mentioned turmeric. It will look great in combination with Beargrass and white Ornithogalum. Another fantastic combination for wedding bouquets is white flowering turmeric with blue flower laths of hydrangeas. With a pure white combination of turmeric and peony flowers, you will achieve a perfect purity effect. Under these flowers, a green leaf cuff stands out. Turmeric flowers can also be combined with flowers of the bride’s veil (Gypsophila), freesias, green anthuriums, or alstroemeria.

Curcuma longa and Curcuma rotundifolia are processed for culinary purposes, while Curcuma alismatifolia and other species are grown mainly for their beautiful flowers. The best time to harvest turmeric tubers comes after flowering when the stem begins to slowly retract.

Remove the turmeric from the pot and tap the soil. If the tuber is large enough, you can divide it into two parts – one for consumption, the other for cultivation the next year. In the same way, turmeric also reproduces.

Clean the harvested turmeric rhizomes, strip the roots and then cook. It is by cooking in the rhizome that a yellow dye called curcumin is created, the content of which in the rhizome is around three-tenths of a percent. After cooking, dry the rhizomes and then grind to a powder. Turmeric benefits

“Let the medicine be your food and the food your medicine.” Paracelsus

Turmeric is an essential part not only of curry spices. The yellow dye contained in the tubers is used for dyeing textiles, food, and cosmetic purposes. Turmeric is also used in folk medicine.

It has anti-cancer effects, strengthens the body and bile production, has a beneficial effect on stomach and kidney problems, reduces the amount of cholesterol in the blood. Like ginger, it can be grated into tea with honey to treat colds. Turmeric benefits

Golden milk | How to make an Indian elixir of health?

8 Teachings of Buddhism for success

Fresh herbs – How to grow them and what are their benefits?

Fresh herbs - How to grow them and what are their benefits?