Shiitake mushroom and Why to eat them ?

All you need to know about shiitake 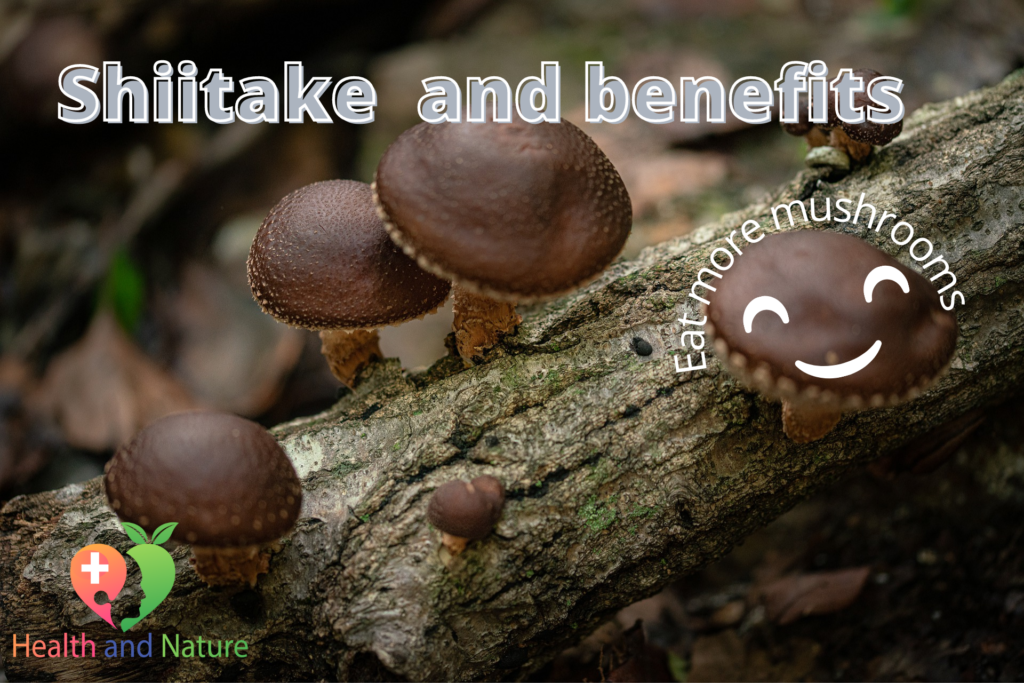 Shiitake mushroom is from a gastronomic point of view a very distinctive mushroom with, fleshy consistency. If we focus on health, from a medical point of view. You will see that shiitake is now a recognized natural remedy for the treatment of various diseases of civilization. Japanese medicine using Shiitake mushrooms for about 2,000 years. And they calling it “pearl among mushrooms” This mushroom has a delicious taste and strong aroma. The second name of this Pearl is ”the elixir of life” above all because of healing and medical effects.

Shii take “oak mushroom” (Shii = oak; take = mushroom) is a highly valued mushroom in the countries of the Orient for its excellent taste and great healing effects. Shiitake is a macrobiotic speciality and at the same time a medicine – according to the Japanese, this fungus is the “elixir of life”. Consumption of shiitake has anti-cancer effects, increases the body’s immunity, lowers blood cholesterol levels, protects the liver and the body from free radicals and strengthens the cardiovascular system.

Many people try to find a helper in nature that would stabilize blood sugar levels, lower cholesterol, and help prevent cancer. At the same time, we already have such possibilities in our hands, we just need to use them. At least that’s confirmed by studies that look at the healing effects of the shiitake mushroom.

The effects of the Shiitake mushroom on our health

Shiitake has a significant effect on promoting immunity!

Absolutely one of the best benefits is that shiitake contains lentinan. ”Lentinan” is actually a glucan that has been introduced in Japan as a standard part of the treatment of some cancers. It has immunostimulatory, anti-infective (eliminates viral, bacterial, fungal and parasitic infectious diseases), antitumor and radioprotective effects.

It has proven successful in the treatment and prevention of acne. In addition to its activating effect on the body, it acts as a free radical scavenger and antioxidant. Free radicals arise from improper diet or excessive consumption of foods with preservatives. Therefore, glucans are suitable for correcting the formation of free radicals derived from food.

Above all, it acts to reduce the level of excess substances from nutrition (cholesterol) and excess hormones (during physical and mental stress), suppresses the risk of increased blood pressure, strengthens the body’s overall defences against viral diseases. As we have already written, shiitake has antifungal, antitumor, stimulates the immune system, improves liver function. Concentrated extracts from shiitake mycelia are called in Japan, for example, Lentinan or LEM. They are anticancer preparations, they treat tuberculosis, fatigue syndrome, bronchitis, hepatitis, they act against the HIV virus. Japanese researchers have found that consumption of shiitake preparations increases the activity of the immune system, increases the activity of macrophages, NK cells, T and B lymphocytes, and increases interferon levels.

Some studies also showing that regular consumption of shiitake counteracts the development of cancer.

Like seaweed, it can bind heavy metals such as mercury, lead or strontium. Based on studies conducted in Japan in the 1970s, extracts of these fungi have become part of a treatment to reduce the toxic effects of chemotherapy in many countries.

What do shiitake mushrooms contain?

From a dietary point of view, it is a very valuable food due to its low caloric value. This fungus contains quality polysaccharides and other valuable trace elements. It contains a large amount of protein (18%), vitamins (B1, B2, B3 and B12, D2) and minerals: potassium, calcium, magnesium and phosphorus. Shiitake also contains all eight essential amino acids in an ideal ratio. (Histidine, Isoleucine, Leucine, Lysine, Methionine, Phenylalanine, Threonine, Tryptophan)

Shiitake in the kitchen

Shiitake has many uses in Oriental and European cuisine. Especially in reduction, macrobiotic and vegetarian diets. Shiitake has a very low energy value but the nutritional value is absolutely high. Therefore we don’t have to worry about gaining weight. Traditionally, shitake mushrooms are mostly consumed in Japanese cuisine. They can be used to prepare soups, sauces, rice, flavour meat dishes (it is a great addition to chicken and rabbit meat) or vegetable dishes. However, it should be borne in mind that the longer they are heat-treated, the less valuable substances are retained in them. Remember! Before use, the mushrooms should be soaked for a few hours.

⇓  You can check some tasty recipes from Shiitake  ⇓ 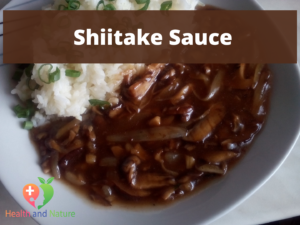 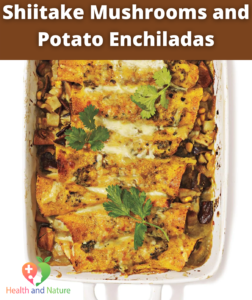 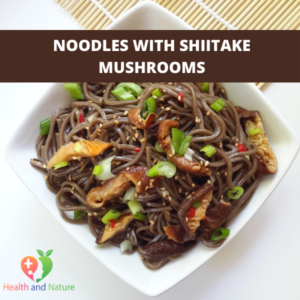 The most impressive experiment, which showed the anti-cancer effects of this fungus, was performed on animals. At the National Cancer Research Center in Tokyo, mice suffering from sarcoma, a type of cancer caused by the virus, were treated with small doses of shiitake extract for short periods of time. In 1970, results published in the journal Cancer Research showed that six out of ten mice had complete cancer regression. At slightly higher concentrations, shiitake was 100 % effective – all mice had cancer regression.

A 1996 study by Drew University found that a protein-bound polysaccharide isolated from shiitake has strong anti-cancer properties. During the study, ten cancer patients were treated with this compound. All of them showed significant improvement after a few weeks.

Similar studies show that shiitake extracts help prevent the attachment of transplanted cancers, and Japanese researchers have achieved “excellent results” in a follow-up four-year study of patients with advanced and recurrent gastric and colon cancers. Shiitake extract is also being tested for use with a modern chemotherapeutic drug to mitigate its toxic impact on healthy tissues and the immune system, as we wrote in the article above.

The method of growing this mushroom on the “natural tribe” is still used by most growers in the Orient. In the West, where shiitake cultivation is relatively new, about 80% of large commercial growers use modern methods of growing indoors – in a controlled environment on “artificial sawdust trunks” (actually, they are a kind of sawdust blocks).

The method of growing shiitake on sawdust logs is a direct result of the biotech revolution. The first time this method was used between World War II. Using the latest technologies, growers of this exotic mushroom mix various nutrients with sawdust, which they then form into a block, sterilize and inoculate with shiitake mushrooms. The blocks have to be placed in semi-sterile growing rooms in “ideal conditions” to maximize fungal growth.

Ideal growing conditions usually give other species of fungi the opportunity to grow on artificial trunks and compete with shiitake. Most of the growers using modern technology are forced to treat their growing rooms with fungicides.

Which cultivation is better? Shiitake mushroom

The controversy over which of the cultivation methods produces the tastiest and most nutritious mushrooms is taking place as passionate debate in the exclusive world of exotic mushrooms.   One of the best growers ‘Ftausaro Taniguchi’ said

that mushrooms grown on artificial sawdust logs, look and taste worse than their mushrooms which are grown on natural logs. In addition, they are also convinced that fungicides used against pests in semi-sterile growing rooms pose a risk to the health of both consumers and workers. In other words, just go to the wild and you will find healthier mushrooms than grows.

When to plant ?: It is planted almost all year round on the substrate, on trunks and branches in the spring and summer months.

The first harvest ?: It usually bears fruit on the trunk one year after planting and on the substrate in 2 months in several waves.

How to store seedlings?: Preferably in the refrigerator. Under these conditions, it lasts 2 – 4 months.

How do I know that the seedling is alive ?: The inoculated grain has a natural brown colour with a white coating resembling fluff or mould, yellow spots may appear, which is not a problem, but it is a signal for immediate planting. Therefore you will feel the aroma like mushrooms until fermented. The green colour means that the fungal culture is spoiled or infested with mould.

Here Are TWO easy methods How to grow Your own Shiitake

1. Way How to grow shiitake mushroom on a log 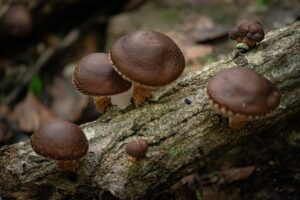 This easy method is suitable for growing in the garden. It usually bears fruit in one year 3-6 years depending on the hardness of the wood.

We will need a fresh trunk or branches of oak, hornbeam, alder or beech, paraffin. A greenhouse is not important. But you need some growing space. Definitely in the wintertime.

Fill these holes with seedlings and pour molten paraffin over them. Put the strain inoculated in this way into a PE bag, which we tie with a string by inserting a piece of cotton wool or a roll of pulp into the harness so that the strain can breathe.

Store the inoculated strain in a bag in a place where the optimal temperature is 28 ° C. The time of growth of the fungus is about a year. Remove the overgrown trunk from the bag and plant it out into the soil. We do this in the warm part of the year. We dig the log into the ground so that 2/3 are in the soil and 1/3 above the surface. Just choose a shady place with moist soil. The groundwater level must not be high, as the fungus dies underwater in a short time.
In times of drought, I water the area around the trunk. The trunk needs to be protected from major frosts by placing it in an area where the temperature does not fall below -5 ° C.

The trunk bears fruit according to the quality of the wood for the next 3-6 years.

2. Way How to grow Shiitake mushroom on straw 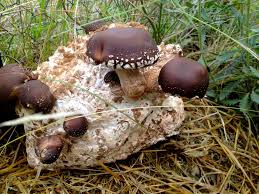 This undemanding method is suitable for growing in an apartment. It usually bears fruit in 2 months in 3 harvest waves.

We will need sawdust, crushed straw or crushed corn cobs.

Preparation of the living medium (substrate):

Mix about half a kilo of finely chopped straw or sawdust into a bag. Next step pour the boiling water into the bag and close it. Straw Must be underwater. Wait for 15 hours to cool down

If there is a residue of water in the bag after cooling, cut the croissant down and let it drain. We open the bag, pour the seedlings and tie and shake them over the cotton wool in a time.

We store the bag with inoculated material in a room without direct sunlight, with a temperature of around 20 ° C. The best temperature is at 25 ° C. Remember higher temperature is a risk of mould development! So it’s better to leave the bag at a lower temperature. Important is the temperature inside the bag can be monitored by inserting a welding thermometer. The temperature must never exceed 29 ° C! The contents do not dry out in a well-closed bag, so we do not add water to the substrate. The period of mycelium ingrowth with straw ends in 2 months.

After growing, cool by transferring to a room where the temperature is 10-15 ° C, for 5-8 days.
Fertility growth:
After cooling, transfer to a room with diffused light and a temperature of 15-25 ° C. We cut the bag, remove the cube of the substrate and place it in the aquarium or make a mini foil steamer. We maintain the humidity by dew in the range of 60-85%. Fruits grow from the substrate without excessive drying of substrate.

We collect the fruiting bodies by twisting them from the substrate. Remove friction residues to prevent mould. You have to place the cleaned substrate in a bag, which we tie through a cotton ball or a piece of pulp) and let it rest for 2-4 weeks at a temperature of 20 ° C. After a few weeks we just proceed according to the previous step. Take it out of the storage bag, pat it by hand and spray it with water and store it in a room with a temperature of 15-25 ° C for procreation.

No Content Available
ADVERTISEMENT
No Result
View All Result